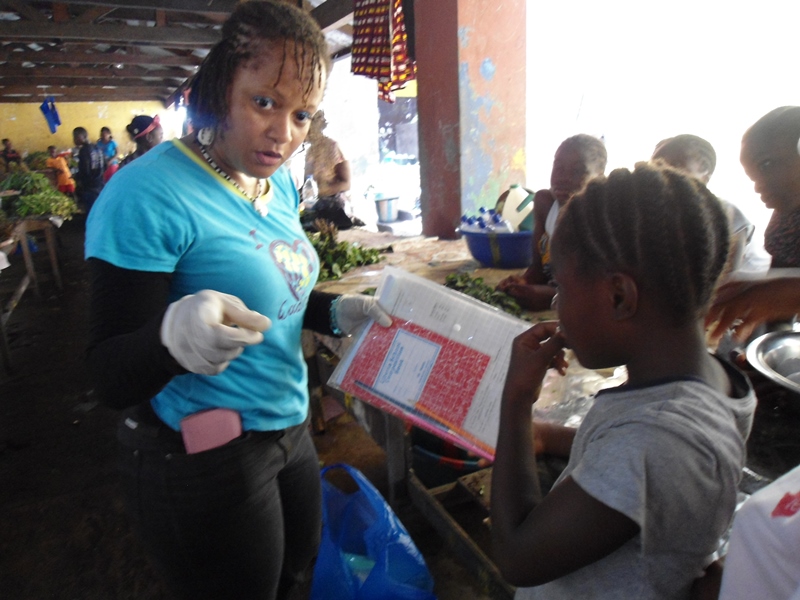 I recently stumbled on an article written by a journalist I met at the 60th Commission on the Status of Women (CSW) in New York. here is an excerpt and a link to the full story:

When asked why she became a first responder during Liberia’s Ebola Crisis, Brenda Brewer Moore said she drew her resolve from one of her country’s darkest times, “I lived the majority of my childhood years in Liberia during the civil war and saw the amount of death and destruction that the war caused. And as a child, one thing I promised myself was that one thing that I would always do when I grew up was to be part of the solution – not just to sit and complain but to make some tangible contribution towards the development of Liberia.”

Moore’s was one of several gripping stories told by women first responders from around the world at this year’s 60th Commission on the Status of Women (CSW), hosted by the United Nations and ActionAid from March 14 to March 24 in New York City. The panel, “Women as First Responders: Featuring Testimonies and a Visual Gallery Elevating Women’s Voices in Humanitarian Action,” took place on March 15.

Each of the women on the panel was soft spoken but firm about her passion for her work. All told stories about the lack of resources, inexperience, and heartbreak they had experienced. They also emphasized the importance of valuing the roles of everyday women in disaster planning, management, and response.

Women first responders have been all but absent from the stories we hear about emergency response work, which traditionally focus on the role of police officers, firefighters, emergency medical technicians, and other stereotypically male figures. By describing women as the first (and sometimes only) responders, this year’s CSW provided a different narrative.

While their stories may be less well known, as mothers and caregivers, women around the world are often the first on the disaster scene. “Women are in many cases the first responders and in many cases, the only responders when crisis strikes,” said Kyung-wha Kang, the United Nations Assistant Secretary-General for Humanitarian Affairs and Deputy Emergency Relief Coordinator in the Office for the Coordination of Humanitarian Affairs (OCHA), during the panel. “In Fiji, following Cyclone Winston, women looked after the sick and elderly, they helped one another source food and water, and provided one another with support. In conflict-ravaged Sana’a,Yemen, women got involved in every aspect of response, from search and rescue and assessing needs, to using social media to convey information, and setting up a mass hosting network to house the displaced,” she added. “As a first responder in Yemen told us, ‘the women here are everything and everything is on them.’”

In the case of Liberia’s Ebola emergency last year, the government was forced to close schools for six months to help curb the spread of disease, leaving children without a way to continue their education. Moore, a human resources specialist and mother, decided she could not let Ebola keep the children of her country from learning and growing. Her organization, the Kids Educational Engagement Project (KEEP), took action and delivered door-to-door educational materials, eventually reaching over 7,000 children throughout the country. The organization has since expanded to provide a range of support to Liberia’s educational system, and is currently completing a free computer literacy lab for the country.

While women often help others in crisis, they are also frequently the victims of catastrophic events. On average, women and children make up more than 75 percent of those who are displaced by war, hunger, persecution, and natural disasters. Those women who were already impoverished and vulnerable before crisis struck, as many are, are at even higher risk for sexual exploitation and violence.

As the victims of crisis, women have unique perspectives that can inform their work as first-responders. Mary Jack Kaviamu’s experiences in her home country of Vanuatu are a testament to this. Kaviamu spent much of her career with the country’s provincial government, as well as with the Pacific Institute of Public Policy, an independent think tank dedicated to supporting and stimulating informed policy debates for the Pacific Island community. After running unsuccessfully for a local government position in Vanuatu’s recent elections, Kaviamu became manager of ActionAid’s Women Talk Together Forum, where she continues to advocate for gender empowerment. “Tradition in my country and culture has become a barrier in all [levels],” Kavaimu observed during the CSW panel.

A popular tourist destination, Vanuatu was devastated in March 2015 by Tropical Cyclone Pam, a category 5 storm. A year later, the country’s infrastructure is still in disarray and water, food, and shelter remain in limited supply. In her prepared remarks at the CSW, Kaviamu described the crisis’s impact on women in Vanuatu: “We are not included. If we are not included, men cannot discuss our issues—women’s issues. Women alone can explain their issues and determine their priorities. Men cannot explain the real issues that affect women. It is women alone who can explain themselves.”

“Women trust women – that’s the reality,” added Moore. “[With Ebola], you have a lot [more] women who are home during the day than the men, so with the teams that we sent out into the communities that are made up of the mothers, they were not as responsive as when we had female team leaders… They have to accept what you brought because some of them believe that, oh there was Ebola in the packages and all these kinds of misconceptions. So seeing another woman, another mother out there, made it easier for them to accept what we were trying to do. And just the fact that we were able to relate on so many other levels, it helped our work a lot.”

“I don’t want to keep women in the role assigned by the [gender] division. But clearly – because of all this experience, they know how to manage catastrophe, they know how to organize distribution of equity. They know how to be creative with difficult situations,” said Yolette Etienne, a veteran first responder from Haiti who now works with ActionAid as the country’s director. “And that means they can be more effective in times of emergency and because they are suffering a lot in times of emergency. If they are in charge, that means also they can transform the gender power division.”

Researchers with both UN Women and the Institute of Development Studies have found that involving women in humanitarian programs helps reduce gender inequalities, improves access to services, and increases the effectiveness of humanitarian responses. Despite all this, women often run into structural and cultural obstacles that make it difficult to participate in humanitarian action. “In my country, women have no political representation in the parliament, which makes [it] difficult for women. Public decision is [a] male space with no women participating,” said Kaviamu.

These obstacles can perhaps be overcome by the growing solidarity between women first-responders, a recurring theme among the panelists at CSW. “The context may be different but [each of us] are facing the same challenges and the same fight,” Etienne told Muftah after the event. “It’s about learning, it’s about feeling ‘It’s not so singular what I am doing, I’m not fully isolated, I can coordinate better, and that [is] the only way to overcome the situation.’”

Panelists also highlighted the overall importance to their work of women’s empowerment. “I am a living example that women can be first responders and key players in humanitarian response, provide innovative solutions and that community-lead responses can be led by women,” said Moore, who still works as a human resources professional while running KEEP in her free time.

Kang echoed those sentiments. “Empowering [women] to take on those roles but also to go further and to be an integral part of decision-making on humanitarian action from the lowest to the highest level is also one of the most effective ways that we can deliver humanitarian action.”

Women Are on the Front Lines of Responding to Humanitarian Crises